Creates conceptual art: an art form in which the idea or concept is central. His artworks are primarily intended as a challenge for the intellect and presently deal with such themes as religion and power.
He is involved with moral factors as he labels them: egoism, conformism, dogmatism, self-respect, sense of honour, capabilities, desire, transience and more… In his art he presents an uncommon view of the world and of human existence.

My work focuses on the question:
What would a human being have done
if the other person would not have had power?

The elaboration of that theme has evolved over the years. In 2019 he moved with his wife Brigitte Boss to their current home and workplace TAK Art Space. It is a paradise in the making where he is busy every day to make small interventions. That increase biodiversity and he sees more and more forms of life around him. By ensuring that insects feel at home here, the special birds also come here and they also attract other animals. He thinks it is wonderful to see how nature slowly grows and offers him an enormous wealth of impressions. More and more he become convinced that he don’t have to go around the world to see everything.

“Here at our Art Space, in our own paradise, I never get tired of all the small worlds around me. That environment gives me new ideas every day”.

For that reason, since the beginning of 2019 he have been busy making paradise diorama’s that he calls  “Fenestram in Paradisum”.

Taxidermy is becoming an increasingly important part of my job. As a child I was obsessed with insects, beetles, birds and reptiles. In my earlier work I occasionally made use of stuffed animals, but I notice that they are becoming a recurring element in my paradises. They bring life to the work. Amazing but true.

Starting at an early age, Arnix looked with amazement at the world with a sense of wonder; especially at people who think that they hold powerful positions. Based on his experiences in a Roman Catholic upbringing, amidst nuns and priests, he developed a sharp eye for manipulation and hypocrisy.
At the same time he gained important insights concerning discipline, perseverance, tradition and symbolism.

At puberty his sense of wonder was transformed into knowledge and consciousness. At nineteen he turned away from home and literally chose his own path by starting to live independently and fix his own problems. During those years he felt that faith is trust.

At that point in time, his father’s experiences during WW II were of great influence on Arnix. His father had been forced to work in Germany and returned traumatized, with a great fear of uniforms and authority. That trauma played a decisive role in Arnix’s life and his decision to refuse to enter military service when he is called up. After writing a statement of objection and appearing before a tribunal, he was acknowledged as conscientious objector and fulfilled his 18 months of alternative service.

He then created a private company, initially as photographer (Academy of Fine Arts Sint Joost Breda, The Netherlands and The Dutch Photo Vocational School, Apeldoorn, The Netherlands), later one in the field of communication and advice. He was particularly concerned with unorthodox ideas and solutions, using cognitive social psychology. Here in the commercial discipline of communication, Arnix also often looked for the connection with art, and always searching for boundaries.

It is not anarchism that drives him forward, but the old question: Why? Elements such as strength and power trigger him to resist. This latent need for clarity has been transformed into a number of confrontational objects, which depict his questions about power and transience. Within his images and objects, Arnix puts forward questions of eminent value. Questions, which perhaps will never be answered, but will jumpstart a thought process. These questions mainly challenge our subordinate role in the world. The choice is for the individual to make. Each day we answer the questions put forward by daily life. Materials and techniques form a substantial part of Arnix’s need to express himself. He deliberately use kitsch elements for embracing mass culture with artistic ulterior motives. He formulates his thoughts in material and style, and sometimes hires the best professionals in the field in order to realize a given project.

He does not draw conclusions, but denounces bad situations. Asks pressing questions that continue to haunt you, tenaciously asking for one’s personal answer. Often it is a question which incorporates its own answer. But the question eats into you. Arnix does not make your life easy. In the end you must live on with your answer… 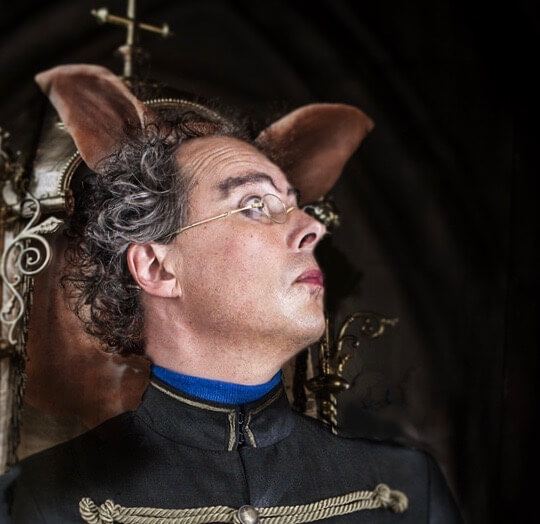